“When you cannot be deceived by men, you will have realized the wisdom of strategy.”

Cannibalism is being suggested by some as a serious solution to the food shortages that will likely soon be caused by the climate crisis… but I’m the one who appears ‘crazy.’

Last I checked, none of my proposed solutions to the Sustainability Crisis involve Soylent Green.

We have discussed the Matrix Organizational Structure of our world in both the book, Uncage Human Ingenuity, and Episode 33 of the Podcast-Audiobook. Globally, one of the 5 Roles in our world is not operating correctly, similar to what a misfiring cylinder causes to an engine. The Role of Information is compromised due to the Fall of Journalism (and the associated problems caused by terrible news and information), and the Silo Effect within Academia (which basically means a lot of new knowledge and discoveries are not being made and/or largely being ignored).

Escalation of Emotions in Public Relations

Many years ago, I was fortunate enough to hear a model police officer discuss options in various situations. This officer took great pride in only drawing their weapon with the intent to fire twice in their entire career spanning over 25 years. He mentioned how, if any cop wants to, they can slap on a pair of black leather gloves, walk around with an attitude, and escalate situations into violence almost every shift (and he didn’t exactly deny there were cops on the force that do exactly this).

His style of always starting on the basis of calm, level-headed thinking intuitively makes far more sense. He said he would always initially try to approach a situation as calmly as possible, since this afforded the most options. If need be, he could raise his voice, if this did not work, he could verbally escalate the situation, with the final resort requiring using physical force, and possibly even escalate with the intent to kill. However, he took pride in the fact that many situations didn’t require more than a calm, level-headed, confidant approach.

I have been asked now on a few occasions what my thoughts are on climate activists like Greta Thunberg (See references). While I admire the passion and resolve of individuals like this (in my opinion, it is monumentally better than apathy), I have already stated many times that the Sustainability Crisis requires leadership, guidance and level-headed thinking. Our communication system is in such disrepair that we have burdened a 16-year-old girl with the fate of our planet and species.

It’s no wonder why she is so upset. However, people her age grew up in a world where they never trusted the news. It was in shambles when they got here. For any of us that are a bit older, we lived in a time when the news didn’t used to be such a joke. Unfortunately, not all of us have been fortunate enough to have received that memo.

Not to mention the story of sustainability, global warming, and climate change has been going on for so long, I cannot honestly remember a time in my life when it wasn’t being discussed. Due to issues like Outrage Fatigue (see: COVID-19 Article), over-saturation of information (see: Page 104 of Renegades of Disruption), and a host of other issues, a lot of people are exhausted when it comes to this story. The communication of the Sustainability Crisis has been so terrible that it just sounds like a broken record now.

What has been the result of this anger?

Greta’s (as well as other activists’) campaign has succeeded in some amount of traction. This month, October 2019, The Guardian has begun randomly attaching ‘Crisis Notes’ on many non-sustainability stories, and some news outlets have finally started to call it a crisis. 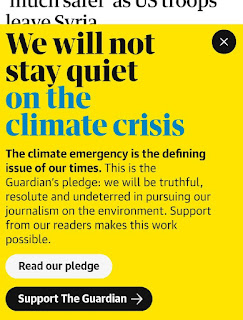 ***Here’s a screenshot taken earlier this month (October 2019) when visiting The Guardian on mobile.***

The Guardian’s Crisis Notes should have started over a year ago in September 2018 following the United Nations Crisis Message (see Article 12: Problem #7 - Incorrect Global Perception or Episode 40 of the Podcast-Audiobook), and ideally, all news outlets would be operating in a similar manner.

However, this has not happened. This outrage and a lack of properly communicated information has led to further polarization on the issue (I won’t post it here, but it’s not exactly hard to go find terrible comments and actions towards climate activists, including Greta).

Is it truly time for anger?

If we follow the police officer’s thought process on escalation, then the Sustainability Crisis is one step away from full-blown violence. It makes intuitive sense that some extremists on both sides of the issue (believers and deniers) are going to escalate into larger and larger displays, protests and eventually violence, possibly even forms of terrorism.

Is it truly time for anger? Which FYI, is the final stage prior to escalation of violence? ‘Cause that would mean most people are on board with the issue. But due to the communication problems at play, most people who believe in the issue (and still rely on the credibility of news outlets), are unaware that the problem has escalated, and deniers are unaware that any issue even exists. Not because they are dumb, but many of them still rely on the credibility and responsibility of news stories.

Here’s how many people took part in the 2019 global climate strikes:

As of today’s date, the current global population is 7.7 Billion people, which means that less than 0.001% of the population affected by the issue are involved in the protests (Although it did span about 77% of countries globally– hey there’s Pareto’s Number again).

So, although approximately 77% of nations are deeply concerned with sustainability, less than 0.001% of individuals within these nations globally took part in the protests.

Perhaps, but let’s look at a different protest occurring at present on our globe that has had much more effective communication: Hong Kong, 2019:

An estimated 1.7 Million people out of a total population of 7.4 Million took part in the protests in August (2019 Hong Kong protests). That’s about 23% of the total population. For perspective, if the same percentage of people marched in the climate strikes that comprised 77% of total nations, then it would put the number at about 1.8 Billion people.

Still trying to tell me I’m wrong on the issue of incorrect global perception?

What does this Crisis require?

The same as any other Crisis:

Leadership: Preferably not from children for two reasons: They lack experience, and most importantly, children need to focus on being children and should not be burdened with something like the future of our species.

Neutrality: This story is equal to survival, since it has escalated into a crisis. This is no longer political, economical, or even ethical. And the fact that most news outlets are reporting on it as though Sustainability is still political, economical, or ethical has become a fuckin’ joke. Neutrality is also the reason sustainability cannot be attached to other stories. It’s all good if anyone wants to go Vegan, but this plays a tiny role in the grand scheme of things, and based on my research, it only results in causing further divide over an issue of human survival, see Episode 42 of the Podcast-Audiobook.

Level-headed Thinking: Something that the world has not seen in over decade due to the Fall of Journalism (Fundamental Disruption of Journalism) and the rise of influence in public opinion from social media.

Passion: Something Greta, and many activists have in spades, but they currently lack the other necessary attributes, 'cause they’re children. And although the words of children should never be ignored since they will eventually inherit the planet, I’m both embarrassed and disheartened that we also expect them to lead the world on a Global Crisis of this magnitude. They’re kids for crying out loud! Let’s take care of this crisis like rational adults so our kids can go back to being kids. Check out my podcast if you think I lack passion. I doubt any listener would deny two feelings that emanate from it: Like Greta, my rage at the level of ignorance and arrogance on global matters, as well as the tremendous fear I feel for all of you should my attempts at global change continue to go unnoticed.

The perception of this crisis is wrong and activists like Greta are yelling at the wrong people. Not that I suggest yelling at this time, but if you must be angry, at least direct your anger at the ones actually responsible: irresponsible journalists that run click-bait stories and arrogant academics who don’t see the value of any idea that didn’t come from them…

NOTE: as stated in the Viable Underdogs book, "Uncage Human Ingenuity," Wikipedia is often more reliable than many news media these days, so I’ll be using it as a reference from time to time to make this statement more apparent.

Prior to reading: The following article references material included in other books. Check out blurb.com for a list of all books. It may be...

Viable Underdogs
Recommending solutions to global challenges, such as the Global Communication Crisis.