NOTE: In order to better understand all the ideas presented within this blog, I encourage you to first read the book: Renegades of Disruption: How To Overcome Humanity's Overwhelming Resistance To Change & New Ideas.

You can download a free PDF version with this link:
Renegades of Disruption

You can also order a physical copy of the book here:
Renegades of Disruption (Paper Copy)


"Renegades of Disruption" and “Viable Underdogs Presents: Uncage Human Ingenuity: A Realistic, Profitable Global Transition to Sustainability within 10 years” outline a divergence within academic fields that has been occurring for over 70 years (Book  details in References Section). As you can imagine, this would entail some profound consequences. By combining fields, we can employ some very neat, innovative, and unorthodox solutions to many global problems.

However, it is important to remember that we have learned a lot in the last 70 years. If I went back to the 1950’s with a smart phone, it would indeed appear like magic to some people living during that time. But, for those curious and interested enough, explanations could be offered about how they operate. The biggest challenge would be finding those curious and interested enough to learn a large volume of new material required to understand the significance of a smart phone (wireless communication, internet, search engines, etc.). 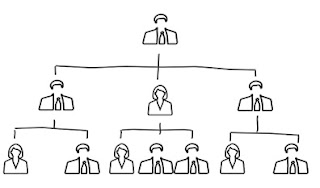 This is an example of a Functional Structure. It groups people by the jobs they do.

“The Functional Chimneys problem, [or Silo Effect,] creates a lack of communication, coordination, and problem solving across functions. When problems occur between functions, they are too often referred up to higher levels for resolution, rather than being addressed by people at the same level. This slows decision making and can harm organizational performance.”

What this means is that one department doesn’t always cooperate and communicate with other departments since these departments don’t tend to interact with each other and share ideas. This is because these structures are based on the foundation of the chain of command. 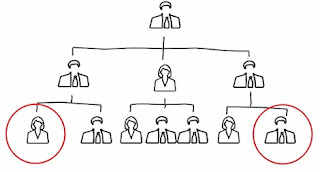 In the above picture, you can see how the two individuals circled cannot directly interact with each other and share ideas. They have to send everything upwards through the chain of command.

One organizational structure is not inherently better than another, but its important to realize that every structure has pros and cons. The Silo Effect is a definite con of Functional organizations.

Some functions that have a lot of overlap, like Sales and Marketing, may share many of the same ideas. Much like different fields of science share ideas like ‘harmonics’ as we discussed quite a bit in Episode 32. But the more these fields diverge, the less likely this is to happen. Engineering departments can start to argue with the accounting departments if they don’t agree on financial matters, because neither field really understands what the other does. An accountant is not an engineer, and vice versa. To overcome this problem, the business field created structures like Matrix Organizations, which allow for more communication and idea exchange between departments.

So back to our collection of knowledge, we have a similar Functional Chimneys Problem, or Silo Effect occurring between academic fields. The sharing of knowledge between fields of science is still occurring, but it is already starting to slow down between fields that share common roots.

The reason for this is that the strategies used to overcome problems like this did not come primarily from Academia. It came from the business sector. In the book and podcast (Episode 33), we started to explore our world’s organizational structure. We also briefly touched on it again in Article 1.

We will explore this concept in more detail in the future, but here’s a quick visual representation: 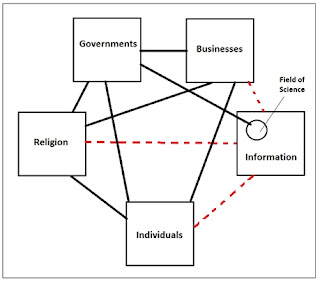 The dashed communication lines in red are the ones in trouble. The role of information, as shown, is comprised of several parts (all of the roles are), and two of the major components in this role are compromised: Journalism (See: Fall of Journalism), and Academia.

Typically, most new discoveries and information are added from academics within the role of information. Ideally, the info would then be repackaged and distributed to the other roles by responsible journalists, but as we now know, this is not what’s happening (See: Fall of Journalism).

During the 20th century, the Business sector started making their own discoveries as they determined (through trial and error) what worked and what didn’t work in business. They created different frameworks (Episode 30) and entire fields such as Change Management. However, academics are not business people. Although some of them may understand the value of this new knowledge, many of them do not since they spend most of their time within their own academic silos.

Their functional structures aren’t even up-to-date enough to prevent the problem outlined on page 54 of the Viable Underdogs book, Renegades of Disruption. This means, as a field of professionals, Academics don’t really understand on a fundamental level what an organizational structure is. If they did, then this exact problem would not exist!

This lack of understanding on business concepts means that their organizational structures have never been re-structured to allow for more idea exchange, and this how I can claim to be able to correct our sustainability problem in under ten years. If academics bothered to read the very books I keep referencing, then this sustainability problem would not exist.

My podcast, which is also simultaneously an audio book, a research paper, and chain letter, is a business framework. It’s simply an updated process that was created by Kurt Lewin, a Psychologist and expert in managing change. Kurt Lewin’s change process was created over 70 years ago, which means this academic divergence is at least 70 years old. I could spend an entire lifetime writing new books, knowledge, and making new discoveries and I wouldn’t run out. I am challenging you all to go look!

If you have Internet access, you too can play a role in this 21st Century Scientific Revolution.

If we turn back the Earth’s clock to Leonardo Davinci’s time, when we still had a small pond of knowledge, it was not uncommon for academics to study more than one discipline. Davinci himself was knowledgeable in Maths, Engineering, Drawing, Painting, History, Cartography, Architecture, Geology, Astronomy, and others. Knowledge was not as plentiful back then, so it was easier to be an expert in this many fields. This was a time before Calculus, and the Industrial Revolution after all.

In 2019, it can take over 10 years of dedicated study to be called an expert in just one single field. And the emergence of all the subfields have further compounded this Siloing Effect. And the more this effect is present, the greater the divide between major fields.

This can be seen with the way we discuss field categories like STEM. It stands for Science, Technology, Engineering, and Maths. And Business is not part of that acronym, though It will probably be added in the near future.

We are not the first ones to present this idea of the Silo Effect of Knowledge. There is a short list outlines in the “References” section of the book. A quick Google search will yield many results as well.

But if you are asking yourself why no one has made these connections before (Business concepts applied to Sustainability), well, globally, we don’t exactly teach people to think this way in schools. Historically, people typically go to school to become specialists, and not generalists, although even this is slowly starting to change. Some universities are already offering programs that combine engineering and business. This makes sense. Who do you think started the fields of business? Scientists, Engineers, and Accountants.

Business is a science, but it appears that the academic world is still slow to change their minds to the acceptance of this idea. Scientists are not experts in Communication, nor are they experts in Marketing, and Organizational Structures. These are legitimate fields that are oftentimes not held in the same regard as other scientific fields. This is unfortunate, and part of the reason why these connections have not been made before. For a better visual representation of the ‘Silo Effect’ in Academia, make sure to check out our YouTube video that explores this exact concept. 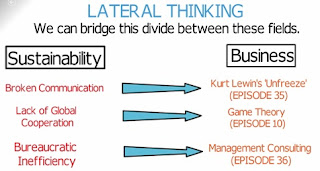 What about those unfamiliar with Business concepts?

As a different analogy, let’s pretend that every academic field is a pyramid with those that have the most education and experience at the top of the pyramid. Here’s a visual representation of what this looks like (Note: You can click on the picture for larger, clearer picture): 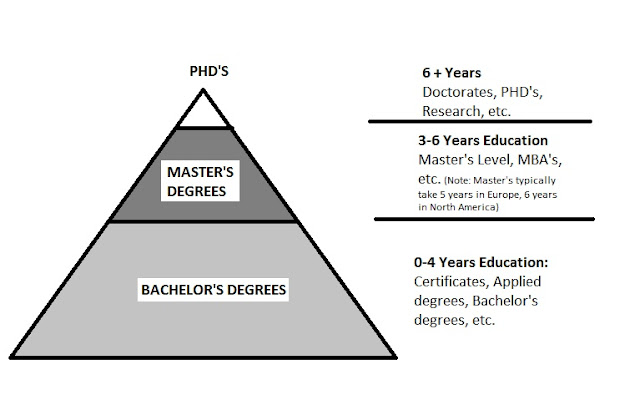 Notice how the more education one possesses, the closer they are to the top of the pyramid. However, the problem with this current design is the difficulty of adding more knowledge as more knowledge is discovered and added to a field. Here’s a visual representation of how academics currently attempt to add knowledge to their respective fields:

The red parts at the top represent ‘new research.’ It looks odd and is unstable because these academics are attempting to increase the height of the pyramids from materials used from the pyramid itself. This can only be done for so long before the integrity of the pyramid starts to become compromised, and is why some academics write papers outlining this exact problem (and others that cause it) such as the “Publish or Perish” mentality (See Episode 29).

However, the business sector has created and employs different strategies that allow for idea exchange among different departments or fields. This allows the height of the pyramid to become much larger because the materials (information) is sourced from a different area (or field) than from the original pyramid itself. Here’s a visual representation of how this looks: 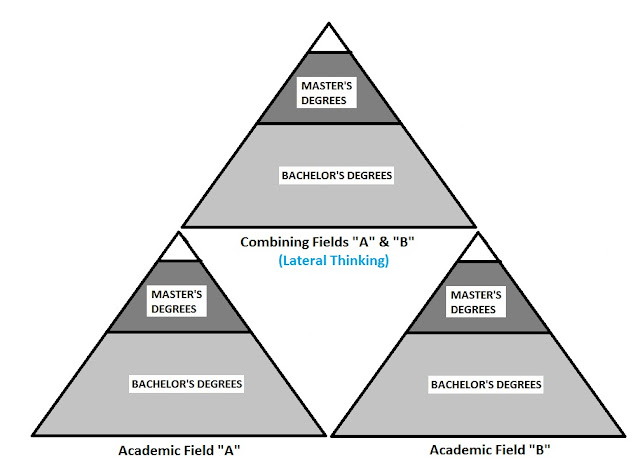 You can learn more about this exact thing in the book: “The Medici Effect” by Frans Johansson. Johansson uses the term ‘intersection of ideas’ rather than the Silo Effect I usually refer to it as, or the pyramid analogy I just presented. In essence, it’s all the same thing.

Check out the Viable Underdogs Book and Podcast to see this in action. Nothing I present is all that complicated or even that sophisticated. It’s just combining the bases of select pyramids (Business & Change Management, Effective Communications, and Marketing, etc.) with the pyramid (or Field) of Sustainability.

If you find any of this hard to believe, that’s fine, I’ll keep writing new material until the amount has become so overwhelming that I start being taken seriously.


Johansson, F., (2004). The Medici Effect. Harvard Business Publishing.
(Of all the books and references mentioned, if you only read one, make sure it is this one, since it creates the correct mindset to entertain my “new ideas.” Read up more on Associative Barriers to ensure you understand the significance of these new ideas).

A free PDF version can be downloaded with this link:

A physical copy of the book can be purchased here:

Prior to reading: The following article references material included in other books. Check out blurb.com for a list of all books. It may be...

Viable Underdogs
Recommending solutions to global challenges, such as the Global Communication Crisis.